Let us help you tailor your charitable gift to your financial, tax, or estate planning objectives.

You are at: Planned Giving > Gift Options > Donor Stories 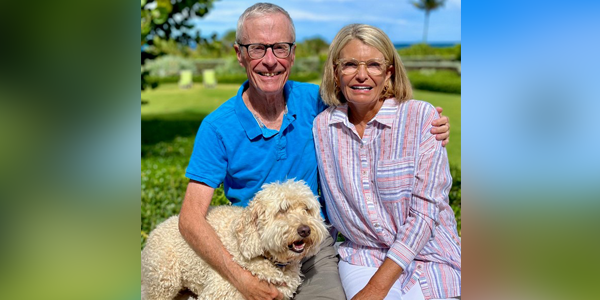 Calvert's Class of 2023 will have more than graduation to celebrate next June. It will also mark the first time an individual of Calvert's graduating class is recognized with a special distinction for highest academic achievement. Bryson Cook '60 and his wife Cindy established The Leitch-Cook Award with a generous $1 million planned gift intended to highlight the academic success of an eighth-grade student every year. The Leitch-Cook Award will complement the long-established Dixon and Brown graduation awards which honor a boy and a girl student who have distinguished themselves not only academically but exemplify the characteristics of a Calvert education.

To honor the academic achievements of a member of Calvert's graduating class in perpetuity, the proceeds from Bryson and Cindy's fund will support a project at Calvert selected by the Leitch-Cook award winner, in partnership with the Head Master and the Eighth Grade Gift Committee.

"Cindy and I are very excited about the establishment of The Leitch-Cook Award to honor Elsie Leitch and Earnshaw Cook. Our hope is that this award will instill the value of giving back at a young age," said Bryson.

Named for Bryson's grandmother, Elsie Leitch, and his uncle, Earnshaw Cook, this award represents Bryson and Cindy's commitment to the long-term success of Calvert students and the desire to give back to the school that made the most difference in Bryson's life.

After Calvert, Bryson attended Gilman School with many of his classmates from the Class of 1960, and then earned an undergraduate degree from Princeton University, a law degree from the University of Pennsylvania, and an M.B.A. from the Wharton School of Finance. After a two year stint at Alex Brown, he was a long-time partner at Venable and now resides with his wife, Cindy, in Palm Beach. His children are Jeb Cook '00 in Baltimore, Laura Wunder in Baltimore, and Rosie Cook in Palm Beach, and he is the godfather of Matt Buck '87, the head of Calvert's Middle School.

Bryson's grandmother and uncle left a profound impact on his life. Mrs. Leitch lived near Calvert's campus where her husband, Vernon, and she raised Bryson's mother, Thayer Leitch. Earnshaw Cook was not only Bryson's uncle, but also a renowned engineer, turned baseball statistician after retirement. Earnshaw's discoveries were said to have changed the game of baseball by non-other than famed sportswriter and Calvert graduate, the late Frank Deford '51.

If you are interested in discussing the impact of your legacy and establishing an endowed fund at Calvert School, please contact Director of Development Sarah Walton at swalton@calvertschoolmd.org or (410) 243-6054 ext. 141.

Let us help you with your gift plans.